The artwork officially confirms the three variants of Doctor Strange along with teasing another, which might be a variant of Strange in another form from a different dimension Among the rumors of many extraordinary cameos, ‘Doctor Strange in the Multiverse of Madness’ has got some new official artworks and fan-made posters, which are breaking the internet this week.

The official artworks and posters are teasing many exciting details about the movie that will deal with the Multiverse. These posters have appeared on the eCommerce website Redwolf, which sells official merchandise of pop culture-related kinds of stuff.

The new posters feature all three variants of Doctor Strange (Defender Strange, Doctor Strange, and Doctor Strange Supreme), Rintrah, Chiwetel Ejiofor's Mordo, and Scarlet Witch. Among these, the most significant is the one with Rintrah, a big green minotaur briefly seen in the first teaser trailer of Doctor Strange MOM released in December. Rumor is Rintrah might be another variant of Strange who has astrally projected himself into Rintrah's body as it happened in the comics.

Rintrah is an intelligent entity from the extradimensional planet R'Vaal. His people, the R'Vaalians, have the look of a green-skinned minotaur from Greek myth. Rintrah's magical ability drew the attention of Enitharmon the Weaver, an other-dimensional sorcerer, who took Rintrah in and began training him as an apprentice. In the comics, Rintrah first met Doctor Strange when Strange asked Enitharmon to fix his Cloak of Levitation torn during a battle against the Khats. Enitharmon instructed Rintrah to return the Cloak to Strange after it had been repaired. Rintrah found Strange shortly after his physical body had been severely injured in a battle with a demon sent by Urthona, an extraterrestrial mystic from Strange's own reality. Strange, who had been mortally wounded, had been forced to release his astral form and take over the bodies of two of his friends, Morgana Blessing and Sara Wolfe. Rintrah found Strange shortly after intensive surgery to save Strange's physical body. Strange's astral spirit, still inside Sara Wolfe's body, urged Rintrah to allow him to project his spirit into Rintrah's body. Rintrah accepted, allowing Strange's and Rintrah's consciousnesses to coexist in the same body.

Below are the rest of the official artworks. Click on them for their full version:

Apart from the above artworks, some fan-made posters were incredibly brilliant and even looked better than the official poster released so far. Below is the one poster that caught the eye of many users on social media. It is somewhat similar to the first poster but shows Strange and Wanda with their faces over each other. Strange's face is in the front and Wanda's face is hiding behind the zig-zag cuts. Below are the rest of the fan-made posters. Click on them for their full version. 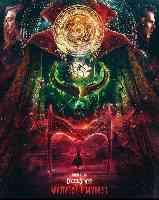 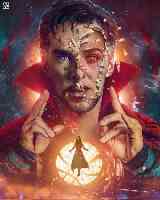 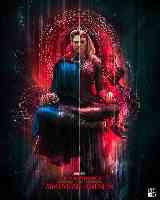 ‘Doctor Strange in the Multiverse of Madness’ follows Dr. Stephen Strange, who distorted space-time by casting a forbidden spell that was too dangerous opens the door to a mysterious madness called the "Multiverse." To restore the world where everything is changing, he seeks help from Wong and Wanda, who wields one of the most formidable powers of the Avengers. But, they are scared that they can no longer do anything on their own as a terrible threat to humanity is approaching humankind and the entire universe.

Directed by Sam Raimi, ‘Doctor Strange in the Multiverse of Madness’ will release in theaters on May 6, 2022. The film also stars Benedict Wong as Strange's ally magician Wong, Rachel McAdams as Doctor Christine, Chiwetel Ejiofor as Mordo, and newcomer Xochitl Gomez is portraying America Chavez.