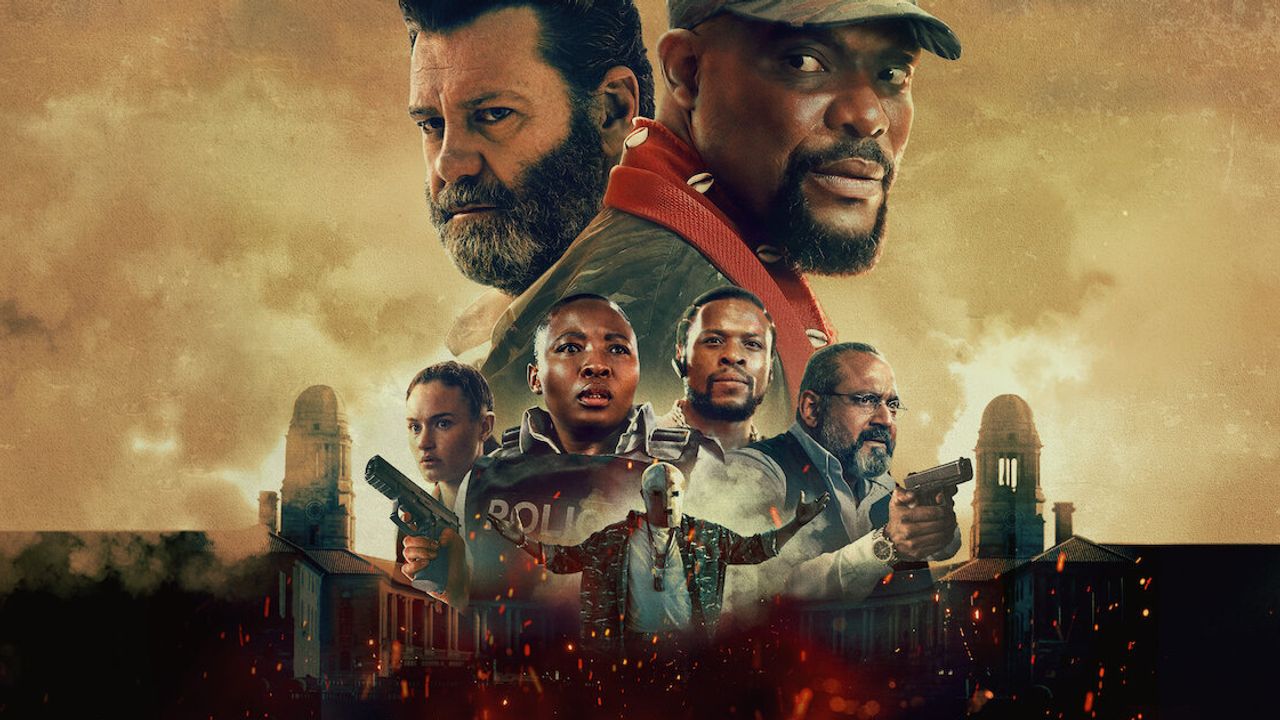 Justice Served is a political action thriller that takes place in a ‘liberated’ South Africa where apartheid is abolished. It revolves around a band of self-proclaimed freedom fighters known as the ‘Numoor’ who invade the trial of Allan Harvey, a white man, responsible for killing a black man under the pretext of ‘self-defense’.

Despite consisting of rough edges all-around, it doesn’t take anything away from the entertainment value of the show. The genre fits very well with the native settings of South African history that feel real given the context of decades of struggle against ‘racism hierarchy’ within the society and the new South Africa aftermath of its liberation becoming a suspect to ‘superficial democracy. The show doesn’t necessarily try to present the ideology of what is ‘good’ or ‘bad’, it rather leaves that choice up to the audience to whom should we root for in the process when hijacking the court turns into a ‘media trial’. As more information is revealed in each episode, both sides of the argument eventually neutralize each other in terms of impact and the history of action, so it all comes down to controlling the narrative from the inside and one’s perception given the past information and the very present.

The show excels in this aspect as no side is truly a ‘saint’ that the people are hoping for, rather it’s about choosing between the two evils, and deciding upon which is necessary and which is not. Having a history of participation in the rebellion for liberation, the Commander of Numoor, Azania Maqoma (Hlomla Dandala) often sees the imagery of the past that collides with the present as it is revealed that the suspect Allan Harvey and the commander himself share a history that goes long before the ‘free days’ in the battlefield of war. It tries to draw parallels between the past and the present in different ways, whether the flashbacks or certain actions that replicate the evil of the war upon in-form of cold-blooded choices. The subtlety of the undefined similarity between Maqoma and Allan in indirect ways is another element to look forward to. Such emphasis on the difference of opinion, yet not so much in the course of action makes it difficult to diagnose the Commander’s true self-engrossed in the words of honor and justice as they shade the contradicting self-belief about the true plan of action.

The members of Numoor remain different from each other but are bound by the ’creed’ of one’s great long-serving organization. There remains internal conflict among the members themselves as both Uhuru (Pallance Dladla), and Teekay (Anton David Jeftha) remain at ideological odds with each other regarding the resolve of the Numoor itself. Uhuru, unlike the other members, isn’t charmed by the words of the commander and seeks to impart justice and protect the innocents by following the true code. He is disheartened by the management of the situation by the commander and has his way of doing things. He becomes the focal point of the internal conflict within the faction and remains on the crosswords about what is ‘right’ and what is ‘wrong’. The conflict also boils in the police department with the subsequent change in management and the ‘trespassing’ controversial orders. The show is all about business, thus the conflicts never end, they just change from one situation to another.

However, it is guilty of stereotyping some of the personalities of the character within one singular trait and basing it on it. They are the ones that protect their interest, but in doing it almost feels like they are specifically catered for the audiences to hate them. Some over-the-top moments within itself make it more than obvious about the ‘fake’ real environment hostage situation it tries to build in certain upon. While the interchange of timelines between the present and the past is not very smooth at times, with some flashbacks starting to play at odd timings, it featured an interesting set of direction choices in intense sequences that are creative in their own way.

It is not exactly what you are hoping for, but it has enough firepower to keep you invested in its constant state of emergency chaos that erupts along its way.