Directed by Taika Waititi, ‘Thor: Love and Thunder’ will see the return of Chris Hemsworth as Thor and Natalie Portman as Jane Foster aka New Thor The poster shows Natalie Portman, who is returning as Jane Foster in her "Thor" look. Jane is wielding the Mjolnir, which seems to be cracked and is most likely the same one destroyed by Hela in Thor Ragnarok, but reforged.

The poster also shows Chris Hemsworth's Thor with his long and shiny hair, which he was seen sporting on set. He is also wearing a new suit in one of the looks, which indicates he might wear this suit sometime in the movie and probably in a new realm. He is swinging the Stormbreaker in the upper right corner.

Portman's Thor is taking much of the poster's space and appearing much bolder and bigger than any other characters in it. It certainly teases that Jane Foster might be leading this film instead of Thor Odinson. As per a rumor, Jane Foster is reportedly taking up the mantle of Thor (not as lady Thor) in the MCU, and Thor Odinson could be seen occasionally in much shorter roles in the MCU. In a recent interview, while talking about his future in the MCU Chris Hemsworth said, "I've done six or seven Thors. As long as they'll have me, I'll turn up. But I feel like there might be waning that kind of enthusiasm for me to keep going."

In the comics, when Thor Odinson was deemed no longer worthy of wielding Mjolnir, Jane Foster was telepathically drawn to the Moon where Mjolnir lay in wait. Upon lifting the hammer, Jane underwent a physical transformation and took on the powers of Thor.

Among other characters, Korg played by Taika Waititi appears to be sporting a mustache, and Tessa Thompson's Valkyrie can be seen in the poster. If we look at the bottom part of the poster, we can see all four of them riding a chariot pulled by mystical goats. It also teases the film to feature a different realm other than Midgard (Earth Realm), probably Asgard or somewhere else.

"Thor: Love and Thunder" has already completed filming and is currently in post-production. The film also stars Christian Bale as Gorr the God Butcher, the main villain in the film, Russell Crowe in the role of Zeus, Jaimie Alexander as Lady Sif, Chris Pratt as Star-Lord, Karen Gillan as Nebula, Matt Damon as Actor Loki, Melissa McCarthy as Actor Hela, and Sean Gunn as Kraglin. As of now, other members of Guardians of the Galaxy - Gamora, Drax, Rocket, and Groot have not been confirmed. 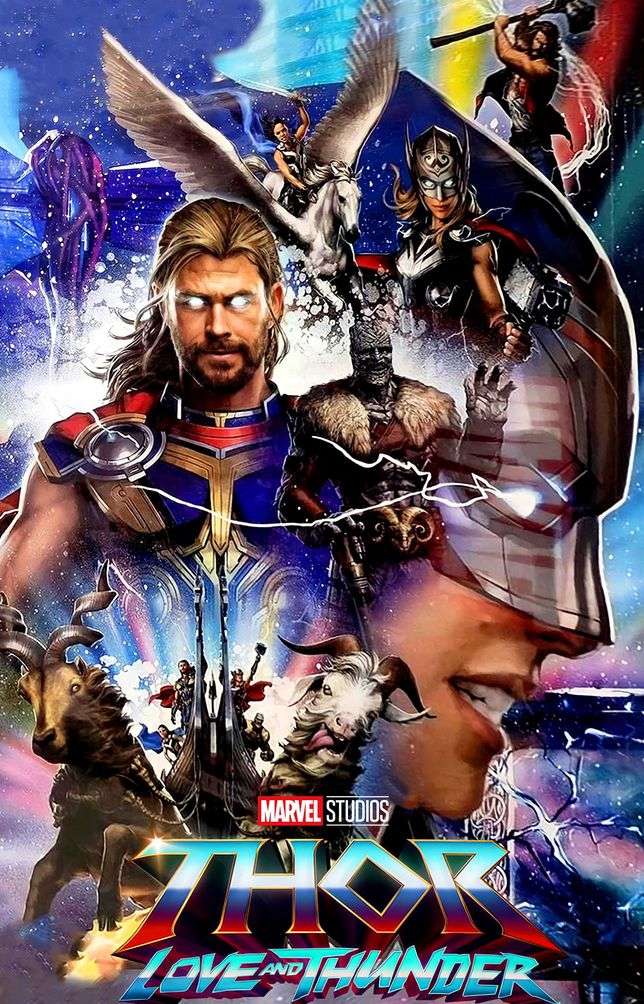