In life, Dr. Li Wenliang was one of China's first health professionals who tried to warn colleagues of the coronavirus and was quickly silenced and repri... 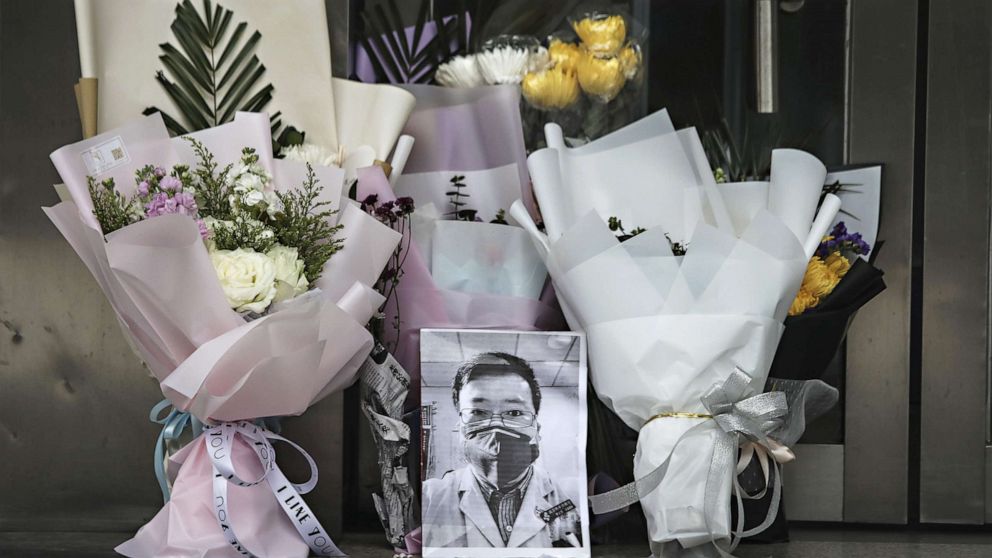 In life, Dr. Li Wenliang was one of China's first health professionals who tried to warn colleagues of the coronavirus and was quickly silenced and reprimanded by police for "spreading untruthful information online."

But just hours after it was announced that Li died from the virus that has now become a global health emergency, anger and grief have erupted in China where citizens took to social media to vent their frustrations over the government's handling of the epidemic and portraying Li as a martyr of the crisis.

"RIP our hero," one Chinese citizen wrote on the social media site Weibo.

Another post read, "What I've learned is to never shut up.
After news broke of Li's death at a hospital in Wuhan, China, the epicenter of the coronavirus outbreak, the hashtags #WuhanGovernmentOwesDr.LiWeliangAnApology and #WeWantFreedomOfSpeech spread on Weibo and WeChat, another popular social media site in China.

Such criticism of the government is highly unusual in the Communist Party-ruled society.

Many of the messages of anger and mourning for Li were later scrubbed from the social media sites apparently by Chinese government censors.

Word of the 34-year-old Li's death reached the United States Thursday afternoon after officials at the Wuhan Central Hospital released a statement confirming he had perished from the disease. Hospital officials said Li died just before 3 a.m. on Friday local time, which is 13 hours ahead of Eastern time.

"We deeply regret and mourn this," the statement from the hospital reads.

Soon after Li's death was announced, a makeshift memorial sprang up outside the Wuhan Central Hospital.

In Hong Kong, a semi-autonomous city of China, where ongoing pro-democracy protests have melded with demonstrations against the government's handling of the coronavirus, mourners displayed a blown-up photo of Li at a vigil.
World Health Organization officials said that as of Friday morning the death toll from the coronavirus increased overnight in China from 564 to 636 and that 31,203 other people in the country have been diagnosed with the virus.

More than 220 additional people in 28 other countries have contracted the virus, including 12 cases in the United States, according to WHO. Most of those individuals recently had traveled to China.

On Dec. 30, Li, who was an ophthalmologist, posted a message to fellow doctors in a chat group on Weibo that cautioned them to wear protective clothing to avoid infection from the novel virus. He reported that he had noticed seven cases of a virus he described as similar to SARS, an epidemic that killed at least 774 people from November 2002 to through July 2003.

But on Jan. 3, Li was reprimanded by Wuhan police, who sent him a letter accusing him of making false statements.

Li posted the letter on Weibo on Jan. 30, two days before he announced his coronavirus diagnosis on the site.

The Inkstone News Letter, which is associated with the South China Morning Post, translated the letter to English and posted it online Friday.

"According to the law, this letter serves as a warning and a reprimand over you illegally spreading untruthful information online," the interpretation of the letter reads. "Your action has severely disrupted the order of society."

The translated letter went on to read, "The law enforcement agency wants you to cooperate, listen to the police and stop your illegal behavior. Can you do that?"

Li purportedly responded, "I can," according to the letter.

The Chinese government said in a statement Friday that it is sending a team from its Central Commission on Discipline Inspection to Wuhan to "conduct a comprehensive investigation on the relevant issues involving the doctor Li Wenliang raised by the people."

During the conversation, Trump expressed confidence in the Chinese government to fight the outbreak, according to the readouts. Xi told Trump that he has "full confidence" in his country's capability to defeat the virus.