Trending Now: ‘The Boys’ Live-Action Spin-Off Series Confirms the Title and Filming Schedule‘Fistful of Vengeance’ Gets First Trailer and Release Date on NetflixEgyptian Series ‘Finding Ola’ Gets New Trailer and Release Date at Netflix‘The Royal Treatment’ Movie Review – A Rom-Com that Fails to Deliver in its GenreAnirudh Pisharody Joins Season 3 Of ‘Never Have I Ever’ at NetflixMarvel Studios Reportedly Trying an All-Black Lead Cast for ‘Fantastic Four’ Reboot [Exclusive]
Home Movies News Venom Has a Key Role to Play in ‘Spider-Man: No Way Home’

Venom Has a Key Role to Play in ‘Spider-Man: No Way Home’

The end credit scene of ‘Venom: Let there be Carnage’ confirmed that Eddie Brock and Venom have crossed over to the MCU, but what are they up to? If you have seen "Venom: Let there be Carnage," you already know that Venom and Eddie Brock have crossed over to the MCU. This also means that they are present during the events following "Spider-Man: Far From Home" as the end credit scene indicated.

The post-credit scene begins with Venom and Eddie Brock in a hotel room during their holiday. When discussing the past, Venom claims that Eddie has no idea what symbiotes have gone through or what their entire potential is, his tiny brain would explode if venom starts sharing 80 billion light-years of knowledge with Eddie.  Suddenly, everything starts shaking, and while they stayed in the same room, but everything inside has changed. There is a TV with J. Jonah Jameson on a news bulletin that mentions Spider-Man and his identity. This event is likely to occur at the same time when Doctor Strange casts the identity cloaking spell, and they all started to come. Now that Venom is in the MCU, what's he gonna do?

It will not be the "obvious." Venom is unlikely to be a part of the Sinister Six or a Villain. As he licked the TV screen showing Spider-Man in the post-credit scene, Venom indicated that he would love to eat MCU's, Peter Parker. However, as seen in Raimi's Spider-Man 3, Venom (symbiote) is generally drawn to the web-slinger (Spider-Man) because of his powers. 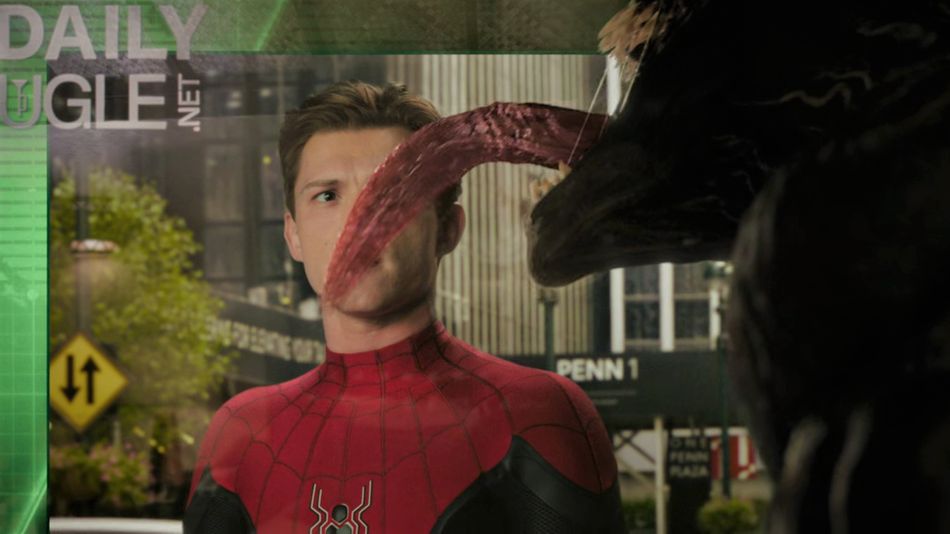 So, if Venom isn't the villain in 'Spider-Man: No Way Home,' does that make him a hero? - Not Likely. According to a new theory (rumor/leak) that has appeared online, Venom and Eddie Brock are likely to be on the sidelines of the movie and will not interfere fighting Spider-Man or Sinister five. While they might appear multiple times, they are just exploring the new world they have got into while talking to each other. It will be very similar to the Venom movie, where they bicker, argue all the time.

This theory gets more credibility if mix it with Daniel RPK's reveal about the Venom appearance in the post-credit. According to RPK, Venom is likely to appear in the NWH post-credit scene where Doctor Strange sends him back to his universe, but somehow the Symbiote stays with Holland's Peter Parker, opening up a whole range of possibilities between Spider-Man and Venom.

Tom Hardy has previously been seen wearing a "Spider-Man: No Way Home" production cap, indicating his involvement in the film. Only time will tell how involved he is and how big of an impact he has. I guess we all have to wait for NWH to hit cinemas, which is less than a month away.